Inspired by the outstanding Michael Quinn at centrefield, county champions Killoe eventually got the better of Dromard in the floodlit Leader Cup Final at the Monaduff grounds, Drumlish on Saturday evening last. 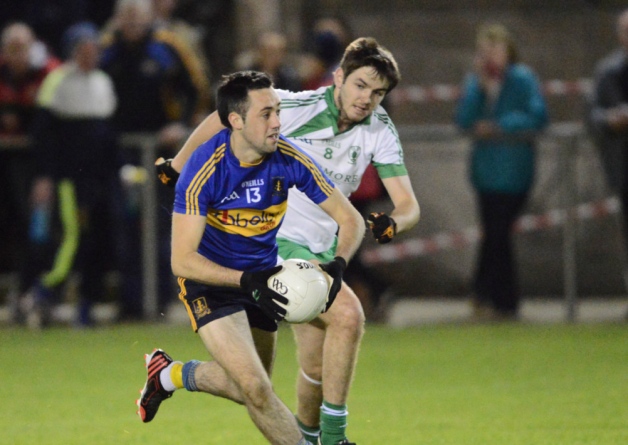 And the undisputed kings of Longford football can now concentrate on the Leinster Club quarter-final clash away to the Westmeath winners (Garrycastle or Mullingar Shamrocks) on November 9th but injuries to Daniel Mimnagh and Ronan McGoldrick are certainly a cause for concern.

Both Mimnagh and McGoldrick were ruled out of the senior league title decider, along with the suspended Simon Kiernan, but Emmet Og were still too strong for Dromard who suffered a significant setback with injured key forward Cian Mimnagh unable to feature.

Thus it was always going to be a tough task for the north Longford side against a slick Killoe outfit, who had a clear edge in fitness, but Tommy McCormack’s charges were hard pressed to complete the double despite having the advantage of an extra man for the final quarter of the contest.

Dromard’s Peter Masterson was sent-off (second yellow card) in the 46th minute, at a stage when the sides were deadlocked at 1-6 apiece, and Emmet Og then regained the lead with a point apiece from Sean McCormack (free) and Paddy Kiernan in quick succession.

But they lacked the killer instinct to put the issue beyond all doubt as Michael Quinn blasted the ball wide with the goals at his mercy and a few other decent chances were squandered by Killoe which gave Dromard a glimmer of hope.

Ross McNerney converted a couple of frees (54th and 57th minutes) to leave the sides all square and a draw was looking the likely outcome before the ball broke kindly for the generally influential Eugene Clarke right in front of the posts and he kept his composure to slot over the lead point in the 59th minute.

And the killer blow was struck in stoppage time when Paddy Thompson got the vital touch to find the back of the net from close range to make absolutely certain of another Emmet Og success – repeating their excellent achievement of the Connolly Cup and Leader Cup triumphs in 2012.

The Division 1 League champions Dromard played with the advantage of the strong wind in the first half but ended up trailing by 1-4 to 0-5 at the break after rising young star Larry Moran raced through to fire home a cracking goal for Killoe in the 18th minute.

It was a wonderful finish by Moran, who also had the chance to find the back of the net in the 12th minute but shot over the bar at the second attempt. The other Emmet Og points came from Mark Hughes along with a brace from Sean McCormack in the closing stages of the first half, both excellent efforts.

Jamsie Martin, Declan Mimnagh and three from Francis McGee (two frees) was the Dromard response but they were facing a real uphill battle against the wind in the second half and suffered another blow when defender Paul McGee was forced to retire injured just before the break.

Killoe looked like they would emerge victorious in comfortable fashion and

it certainly appeared that way when they extended the advantage with further points from Sean McCormack (free) and the always prominent Paddy Kiernan on the changeover but Dromard were thrown a lifeline when Ronan McEntire grabbed a goal in the 43rd minute.

A Ross McNerney free was converted soon after to level matters and the Leader Cup Final remained tight thereafter until that late surge by Killoe got them over the line in a hard earned win.

It was a brave bid by Dromard to capture the prestigious old trophy they last won back in 2006 and Diarmuid Masterson certainly done his best to deny Killoe the double but it was not to be for Enda Macken’s side.