Killoe Young Emmets has been headquartered at Emmet Park in Clonee, just 6km north of Longford Town since June 1993. The quality of the facilities and its central location meant that Emmet Park became a popular venue for club games at all levels. It has also hosted a range of other competitive fixtures including games within the Leinster Ladies Football championship, college and universities leagues and championships and senior inter-county challenges. Among the more high profile ties have been the 2012 Ladies National League Division 3 final, the 2009 Leinster Colleges clash of St Mel’s and Marist College and the 2004 All-Ireland Higher Education League final involving IT Sligo and UCD.

Emmet Park in Killoe is located in the townland of Clonee, 6km north-east of Longford Town.

Our modern facilities at Emmet Park are a far cry from the days of uneven or overgrown fields, whin bushes and non-existent dressing rooms of the past. At a time when transport was in short supply and movement within and beyond the parish wasn’t so straight forward, with various locations providing temporary homes to football in Killoe before 1961 when the field at Cullyfad was purchased.

In the early 20th century, members of the all-conquering team of 1907-1915 established group training at different locations, including the Shrough at Clontumpher and a training field set up by James ‘the Flying McCusker’ Cosgrave and Nipper Hughes in Ballincurry.

In the decades that followed, local people provided their land for training and playing of games; among them the Brady’s of Rhyne, Duffy’s at Clonee, Flanagans at Kilmoyle, Mimnagh’s at Clontumpher, and Devine’s and Gormley’s at Esker. The work of a determined number of club officials paved the way for the acquisition of the pitch at Cullyfad that would provide the permanent base for Killoe games over the next twenty five years. The field at Cullyfad was purchased in 1961 for the sum of £240. Chairman Thomas McGoldrick and Vice Chairman Jack Hagan presided over the purchase and the grounds was officially opened on St. Patricks Day 1963, with Killoe playing Colmcille in the first official game. In January 1974 the facilities at Cullyfad expanded when Packie Joe Lynch and Seamus Igoe marked out the foundations for dressing rooms on the site. Few senior teams would relish the prospect of facing the home side on the famed cambered playing field. Young and old of all ages enjoyed playing for and supporting Killoe in the place that was home to Gaelic sports and Community Games in Killoe for over a quarter of a century.

With a growing population, the move towards larger and more modern facilities was necessary and initiated with the purchase of the field at Clonee in 1987 and so began the long process of fundraising and grant applications before Emmet Park complex came to fruition in 1993. A total of two development draws took place – a house-to-house collection and a prize draw in New York – before the necessary funds were available for project completion. Eugene Murphy headed the development committee as chairman alongside senior officers Berney Brady, Frank Kiernan, John Doherty and Declan Rowley.

Launch of the Emmet Park project in 1990

The new grounds, complete with two playing pitches, club rooms, squash courts and stand was opened by Mr. Peter Quinn, GAA President, on a wet Sunday on 13th June 1993. A large crowd braved the inclement weather as Killoe Young Emmets defeated their old rivals Fr. Manning Gaels by 3-7 to 2-8 to win the Hideout Cup, while Roscommon under the command of Dermot Earley overcame Offaly in a senior intercounty challenge by 2-14 to 1-5. Killoe also claimed victory in the minor (by 4-5 to 1-6 over Colmcille) and ladies U-14 games in a historic day for the club. 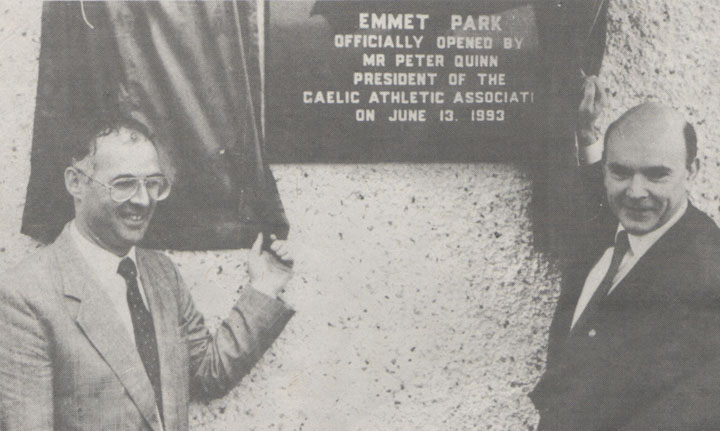 The excitement generated by this new landmark development at Emmet Park in June 1993 also created a feel good factor within the parish and by September 1993 the Killoe Young Emmets senior team had claimed an eighth county title while the juniors completed a hat-trick of championships. Two years later in 1995 the senior title once again found its home at Emmet Park as the club was enjoying its most successful period to date.

Cullyfad remained active in the 2000’s as an option for winter training after serving the club as the home for official matches for over 25 years. The Cullyfad grounds was upgraded in the early 2000’s with floodlights installed and the dressing rooms upgraded. It has also served in the 2000’s as a vital training base for club and county during the winter months and all-year location for challenge matches for Senior, Ladies and Underage teams alike as well as a base for Longford County Minor and County Ladies training.

In time, Emmet Park was extended significantly with additional dressing rooms, meeting room, kitchen and the erection of floodlights in the early part of the new millennium with gym facilities added to the club house by 2005. Further development saw the main playing field converted into an all-weather “Prunty” pitch, the stand re-dedicated to the memory of the late Micheál Kiernan and new training field added, while the meeting rooms and car parking area was upgraded in the late 2010’s.